How did Christmas get cancelled, Aurelia B Rowl?

This is a rather special occasion.  I would like to welcome my first guest ever to this blog-  Aurelia B Rowl!

She has been so kind to join us and let us know some of the behind the scenes writing process that she has gone through for her debut release Christmas Is Cancelled and some of her process on her current works in progress.  Very exciting!

Take it away Aurelia! 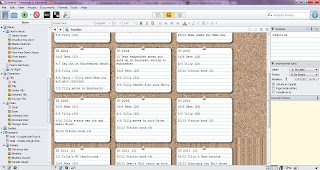 It could come as a surprise to non-writers, just how much background and research an author has to do for a story, which, on paper looks straight-forward. There is still a world to create, even if it’s a contemporary story based in a real place, and there are still characters to bring to life.

Take Christmas is Cancelled, for example, and the screenshot I’ve taken my Scrivener project. I’ve put it in corkboard mode, but would like to draw your attention the sidebar as well. So what are you looking at?

Let’s start with the main feature – the corkboard – and the collection of index cards. If you look closely (but not too closely if you don’t want to risk any spoilers, even though this was just a draft) and you’ll see the index cards make up a timeline. Each card represents a year, and if it’s a busy year, each character will have an individual card as well as a shared card. This really helped with continuity, and getting my ages and events straight in my mind, especially as Tilly and Dean had a past, having known each other for many years before the book starts.

Now look to the sidebar – the navigation menu – where you can see lots of folders and orange rectangles. When I’m creating a place or a person in my mind, it really helps to try and capture or fuel my mental images with photos and images off the internet. Unfortunately, these are often licensed images and I don’t have permission to share them, which is why I haven’t shown these folders. Having an image to look at, makes it much easier to then describe my own version in the text and create a similar image in the mind of the reader. There are also two PDF files in my research folder of actual walks in the Peak District, which inspired the Wilds of Bleakden and the Christmas Day walk.

Let us have a look at another image now… 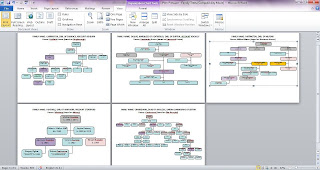 This is taken from my project file for Peer Pressure, the series I am working on at the moment. So far, there are already five books planned for the series and each book interlinks with another, with the same characters appearing across the different books. As the series is also based on the British Peerage system, I needed to have the successions and family history straight in my mind. So, with the help of MS Word and the organization chart tool, I set about creating fictitious family trees for my main families (again, don’t look too closely as there are bound to be spoilers).

I also have an excel spreadsheet that tracks the titles as each generation succeeds to the next tier, for example, the daughter of an Viscount is ‘The Honourable’, but once her father succeeds his father and becomes Earl/Marquess (etc), the daughter then becomes ‘Lady’. It isn’t nearly as straight forward as it sounds, and required lots of planning and research especially if the daughter then marries, but it was all good fun. Just to make things interesting and keep me on my toes, there is a bill going through parliament right now that could change these rules again, raising the issue courtesy titles for male spouses as well as succession rights. But anyway, that’s my problem, and it will all come good in the end.

All of this is in addition to the world and character building, and I have the same sorts of folders filled with timelines and images in Scrivener that I had for Christmas is Cancelled. And that’s before I can really get stuck into writing. I’m very mindful that a secondary character in book one, will be a major character in another book, so I need to set their character set-up ready. It’s all very complicated and it feels like I’m writing several books at once sometime, which in effect, I guess I am.

Either way, I hope to have book one of the Peer Pressure series, Bye Bye, Black Sheep, ready for release during 2013, so keep your eyes peeled for it. For what it’s worth, the 20,000 words I’ve written so far are great, not that I’m biased of course. 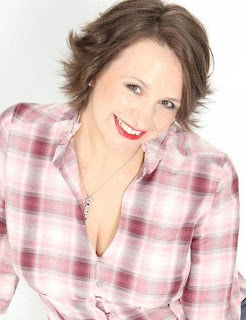 Aurelia B Rowl is a contemporary romance author but you can also find her masquerading as Allie A Burrow, her raunchier alter-ego.
She lives on the edge of the Peak District in the UK with her very understanding husband and their two fantastic children aged 5 and 3, along with their mad rescue mutt who doesn’t mind being used as a sounding post and source of inspiration. They are all used to her getting too caught up with her latest writing project... or five!... and she is guiltily counting down the months until she has both kids at school full-time.
To find out more about Aurelia, or to check out what projects she's working on right now, you can visit her website www.aureliabrowl.com

You can also find her hanging out on:

About Christmas is Cancelled… 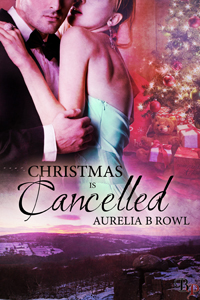 Matilda 'Tilly' Carter didn't think her day could get any worse, but even Christmas had just been cancelled.

The one girl Dean Watson has sworn never to have—never even expected to see again—just flared back into his life and into his home—his sanctuary—like she belonged there. Christmas would certainly be more bearable with Tilly around though…

As the chinks in Dean's armor appear, Tilly seizes the chance to win her knight once and for all. She's not about to take no for answer—not this time—but Dean must resist, even as his heart rebels and temptation threatens to undermine his resolve.

Win or lose? Love or honor? Which will Dean choose? Assuming he gets a choice…

Tears welled in her eyes, clouding her vision. She turned and wandered blindly toward the exit as the first tear escaped, forging a track down her cheek for the rest to follow. Tilly took in a lungful of air and then another. Having made a spectacle of herself once already, she really didn't want to be the cause of yet another scene.

The crowds swarmed around her, with students and family members heading home for the holidays only adding to the usual rush-hour melee of commuters. They jostled past, threatening to swallow her whole, as they rushed en mass in the opposite direction, using their briefcases and suitcases as a battering ram.

It was suffocating. She had to get out of there. Breaking into a run, broken heel or not, she raced through the doors and out into the biting December chill. Her waterlogged eyes struggled to adjust to the dark, dreary sky after the bright station lights, but she didn't dare slow down, desperate to escape the throng of festivities and merriment.

Carol singers assembled outside burst into a jovial rendition of "We Wish You a Merry Christmas," full of joy and happiness. Didn't they know Christmas had just been cancelled?

"Ooof!" Tilly smacked her shin against the edge of a low bench, too dark to see as she tried to dodge the growing audience. She ended up sprawled across the bench, dropping the handle of her suitcase with a loud clatter.

At least the pain shooting down her leg gave her an excuse to be crying. Unfortunately, it meant she had to stop running too. Not good. Whenever things got too tough, too intimate, or too confrontational, you could rely on her to make a run for it. Running away was what she did best...

A tall figure loomed in the edge of her vision, something vaguely familiar about the man's loping gait. In an effort to see him more clearly, she wiped her eyes with the back of her hands, then cringed inwardly at the black streaks now etched all over them. Great. She could add impersonating a panda to her day from hell as well then.

The mascara stung her eyes, rendering her unable to focus properly. She blinked furiously as the man strode past her, talking into a mobile phone in a deep voice that resonated throughout her body and made the fine hairs on the back of her neck stand on end. A surge of adrenaline rushed to her legs, numbing the pain as her subconscious told her to run. Now!

The cloaked figure stopped mid-stride as if he'd heard her gasp. "Mike, I've gotta go," he barked into the phone, hanging up instantly. He backtracked until he was standing right in front of her, his tone changing from a growl to one of surprise. "Basmati?"

Great. She hadn't heard the nickname for years—nine years, four months and...sixteen days, to be exact—and even then, only one person had ever actually used it. She screwed her eyes tightly shut, shaking her head from side to side. No. No way. There was absolutely no way this could be happening to her. Not now. Not today of all days... Talk about kicking a girl when she was down.

I would like to thank Aurelia for stopping by.  It has been a real treat to have you here. :-)